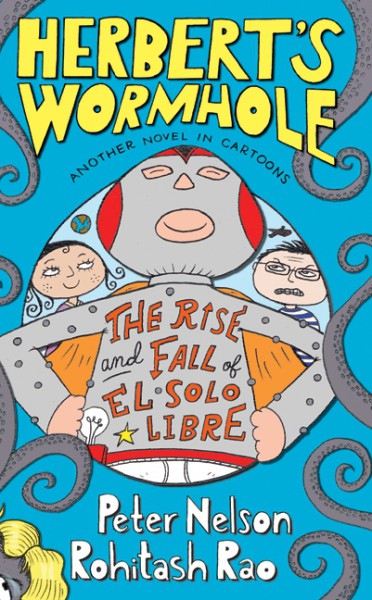 Not available for borrowing.

Herberts Wormhole: The Rise and Fall of El Solo Libre

For fans of Diary of a Wimpy Kid and Big Nate comes the sequel to Peter Nelson and Rohitash Raos Herberts Wormhole, the breakout novel-in-cartoons that J. K. Rowling called absolutely wonderful—fast-paced, inventive, engaging, and hilarious.Herbert, Alex, and Sammi are heroes in the year 2109, having successfully saved the planet from an alien invasion (or so everyone thinks). Everything is going just swimmingly until, inevitably, real aliens appear—the evil, destruction-obsessed Klapthorians. The crew is going to come clean, but then they meet a crazy old man—who turns out to be Alex, age 109—with a plan for saving the world all over again. Can they do it and still make it back home by curfew?The sequel to Herberts Wormhole is chock-full of the same humor, imagination, and irresistible artwork as the first title. There are hijinks aplenty, not to mention skateboard stunts, time travel, and a whole lot of fake moustache shenanigans. Fans, old and new alike, will not be disappointed.